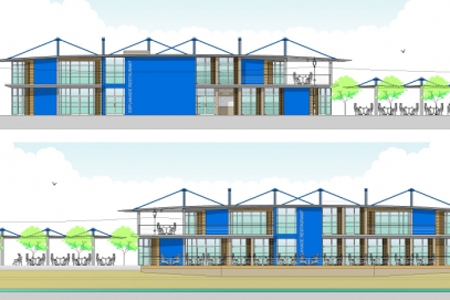 The site location offers an excellent opportunity for a unique building type to provide a high quality restaurant, which would be an asset to not only Southsea but also the city as a whole. Early concept designs focused on the idea of views from the restaurant, and as the design developed it became clear that a building that curved in plan assisted this views concept. The design developed by taking inspiration from the sea and maritime architecture. The plan began to reference the simple shape of a boat, whilst the roof structure began to represent a sail and the masts and rigging that entails.

The curved shape of the building affords views across the busy shipping lanes of the Solent as well as inland across the promenade and Canoe Lake and open space. The scheme also acts as a contemporary counterpart to South Parade Pier and the late Victorian architecture along South Parade. Design influences were also drawn from the seaside architecture of the 1930’s such as the De La Warr Pavilion at Bexhill. The simple geometric lines of the ‘Art-Deco’ period are echoed in details such as the stripped glazing bars. The predominance of glazing causes problems in such an exposed site, so a system of shutters has been incorporated into the design to effectively protect the building in the event of inclement weather.